Search site
Search media library
Back to News Next news

The Fondation Jean-Pierre Perreault (FJPP) is pleased to invite you to the launch of Recréer/Scripter – Mémoire et transmissions des œuvres performatives et chorégraphiques contemporaines (Editor, Anne Bénichou), and to the interdisciplinary performance Quand le dessin devient performance by The Two Gullivers, both taking place on April 1st, 2015 at the BAnQ Vieux-Montréal. 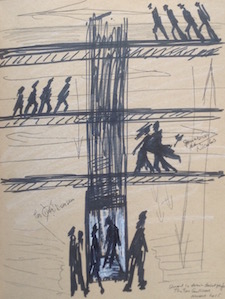 With the participation of dancers Geneviève Duong and Nicolas Patry

The FJPP has invited artists and performance art researchers, The Two Gullivers, to create a work inspired by the Jean-Pierre Perreault archive. A veritable “performed archive” Quand le dessin devient performance will have the two artists intersect with professional dancers, non-dancers, as well as various elements pulled from the Jean-Pierre Perreault archive. For this duo the remounting or reappropriation of artistic performances – such as the reenactment – play a very important role in the revitalization of performative artistic values, renewing the way we look at the process of creating a work. For The Two Gullivers, this act of remounting and reappropriation based initially on numerous sketches becomes a way of transmitting the performance. In their words: “Developing a new performance work by drawing inspiration from sketches and choreographies in the Perreault archive for us is an instinctive approach fully in tune with our creative process.”

WHEN ARCHIVES COME TO LIFE

The event was made possible through the close collaboration of the Institut du patrimoine de l’UQAM and the Université du Québec à Trois-Rivières.

There are moments in art which are truly magical: this performance was one of them. It was rich, complex, touching, mysterious, and ever so vibrant. Performance artists, The Two Gullivers, inspired by the visual and choreographic work of Jean-Pierre Perreault, brought his ideas to life. Perreault’s creative vision was literally ‘embodied’ by the performance artists and the dancers. The artists filled the huge atrium of BAnQ Vieux-Montréal with their profound emotion, generosity and passion. It was a moment of grace thata we will remember. Many thanks!

Video artist Priscilla Guy documented the performance, which will eventually be posted online. In the meantime, we invite you to peruse the photos posted on the FJPP’s Facebook page. 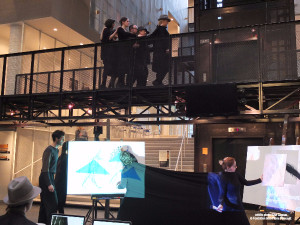